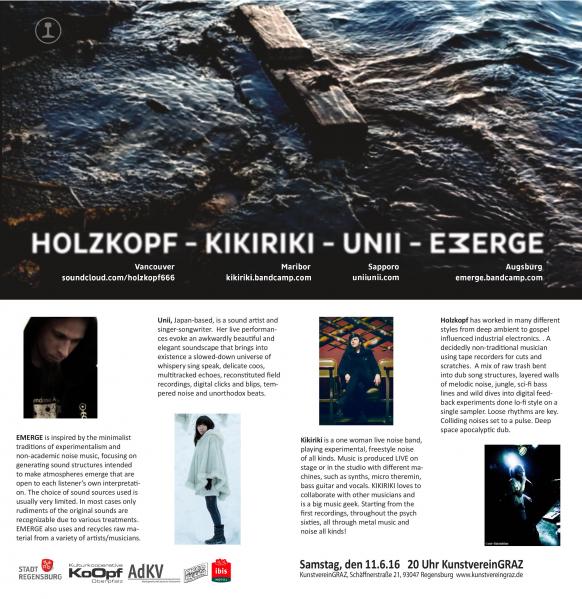 In Spring 2016, Holzkopf will be touring in support of their completely new and most dense music yet. A mix of raw trash bent into dub song structures, layered walls of melodic noise, jungle, sci fi basslines and wild dives into digital feedback experiments done lo-fi style on a single sampler. Loose rhythms are key. Colliding noises set to a pulse. Deep space apocalyptic dub.

Beginning in 2001, Holzkopf has worked in many different styles with very little firm lines between them: from microsound experiments, (almost) slapstick collage and deep ambient music to gospel influenced industrial electronics, harsh noise dub and fast paced, cut-up dance music. A decidedly non-traditional musician, they have mainly used tape recorders for cuts and scratches as opposed to turntables, mixing board feedback and raw circuits in place of synthesizers and budget bin, low bit rate samplers.

Kikiriki…
..one woman live noise band, playing experimental, freestyle noise of all kinds. Music is produced LIVE on stage or in the studio with different machines, such as synths, micro theremin, bass guitar and vocals. KIKIRIKI loves to colaborate with other musicians and is a big music geek. Startin from the first recordings, through out the psych sixties, all through metal music and noise all kinds!

EMERGE is inspired by the minimalist traditions of experimentalism and non-academic noise music, focusing on generating sound structures intended to make atmospheres emerge that are open to each listener’s own interpretation. The choice of sound sources used is usually very limited. In most cases only rudiments of the original sounds are recognizable due to various treatments. EMERGE also uses and recycles raw material from a variety of artists/musicians.

Unii is a singer, songwriter, electronic music composer (ambient, avant-garde pop) from Northern island of Sapporo city, Hokkaido, Japan. Her soft yet powerful voice mixed with electronic sound invites you to the artistic world of hers. Unii has been performing live not only in Japan but overseas in Europe and Asia, such as Singapore, Vietnam and China. Her music is accepted positively borderless-ly and her style is described as post Bjork that it floats us into dream-like soundscape.
Unii released her first album from independent label Elegant Disc “New world, sea and your eyes” (2011) which she did all the creation work from recording to songwriting. The second album “Long scene, before sunset” was released from her own label Nothernlights in 2014. New album will out this year.Unii’s creation is fresh and she is pioneering her own style of music.
Performance introduction
Japan-based Unii is a sound artist and singer-songwriter Her live performances evoke an awkwardly beautiful and elegant soundscape that brings into existence a slowed-down universe of whispery singspeak, delicate coos, multitracked echoes, reconstituted field recordings, digital clicks and blips, tempered noise and unorthodox beats.